Officially designated as a historic building in 1953, it was created solely by the devotion of islanders using local materials – sand, coquina, and limestone. In early 2017, the carpet was removed and the concrete floors, originally laid in five different pours and featuring coquina, was acid washed in bronze. 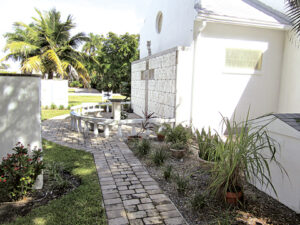 The memorial garden at St. Raphael’s Episcopal Church is part of a serene landscape outside the three buildings tucked in under the shade of palm trees on the scenic property.